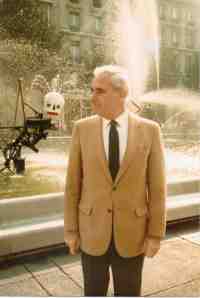 Please let me begin by saying that my mother, brothers and I thank you all for being here today to celebrate the life of our Dad, Herbert Grossman. My brother, Neil, being reticent to speak in these situations, has agreed to let me speak on his behalf. Our Dad was a multi-faceted man: And facet is such a befitting word to describe him, because it connotes a precious stone . And that is just what he was. A jewel; a diamond amongst lesser stones.

Our Dad was a man with a modest and tumultuous upbringing. Yet he forged an upward path early on. He started in the garment center by accident, but he was lucky in that he had a real passion for what he did. He found success and achievement within his first year. From that point on he would strive to create the best product possible…No exceptions and no short cuts. Believe it or not this was his greatest strength and also his biggest weakness. He truly was an industry legend.

He believed that as much as you got, you must always remember that you had to give back. Tzedaka is what they call it. There are many memories of Dad reaching into his pocket to give a dollar to someone in need, and often also stopping and having a conversation with the person. It was our Dad’s way of saying, “I am here to help if you need.” He was generous to a fault…it was even Scott’s and my wedding, when (after a few cocktails) he began to tip the entire wait staff who where wearing Tuxedo’s. (Which was a long list…because it was a black tie affair.) Thankfully our friend David followed him around to re-collect his generosity.

Another facet of our Dad was his incredible sense of humor. He was dry and quick witted. His jokes had us rolling, but mostly because he was laughing so hard by the time he came to the punch line. We couldn’t help but laugh along. We aren’t really sure if the jokes were as funny as we think they are. But we certainly remember the laughing. Another facet was how he loved spending time with his grandchildren. His pride and utter joy was always apparent when he spoke of them, played with them, or showed pictures of them to friends and acquaintances…he would just beam. Jane and Elysabeth were blessed with many good “grandpa years”. He never missed a birthday party. He loved to scoop them up in his muscular “boxer like” arms and chepper them on the face. Both of you would coo with glee. Sam, Will, Matt and Alissa didn’t have as many years with Dad at full strength, but the love and joy he had being with you 4 was no less. All of you were the truly joyful part of his life. You were a big part of that dazzling smile, and definitely what caused his inner glow.

There was one facet that sparkled brighter than any of the others. The brightest spark he gave off was the one that illuminated the love he had for our Mom/his wife of 56 years. She truly was his world. He even hired my mom to work for him back in the 80’s. For 30 years they would wake up next to each other, go to work together, spent all day at the office together, had dinner together, and came home; just to do the same thing over again the next day. They were true partners, soul mates…. in life, in love, in every way possible. Their love was special…it was epic.

Our father was a man of great convictions. Right or wrong, he was never indifferent. He did things his own way. And that held true to his death. He made it strong to his Matthew and Alissa’s B’nai Mitzvah. Being ever present in a room surrounded by his family and cherished friends. It was almost like he had orchestrated his own going away party. And in the end, he wanted just to go off quietly, and rest…which he did. Not a complaint.

Dad we love you truly, we will miss the twinkle in your eye and the mischief in your heart…. we know you are peaceful and at rest. Something you haven’t been able to do for many years. We feel your love, and we hope you feel ours. Rest well Pops (as Neil liked to call him)…We Love you,

Filed under a day in the life, Funny Cancer Mom, herbert grossman